Ever since I was a little girl, I have loved dressing up for Halloween. My mom – pretty much the most creative person you’ll ever meet – would make homemade costumes for my brothers and me.

Years later, I was that girl who still trick-or-treated in high school. And now as a working adult, I still love dressing up for Halloween. Today, I’m sharing some of my more recent costumes with you. I hope you enjoy!

My brother and I dressed up like the brother and sister duo in the 1930 painting “American Gothic” by Grant Wood. Here I am, posing with my brother, who recently published a Sci-Fi book!

Roy Lichtenstein (1923-1997) was an American artist who pioneered the Pop Art style in the U.S. It has a comic book look and feel to it. This style of art features only primary colors, hence the yellow, red, and blue hues. This Pop Art Girl costume was inspired by Lichtenstein’s work.

The Birds is a 1963 film by Alfred Hitchcock.  Tippi Hedren plays Melanie Daniels, who visits the California coastal town of Bodega Bay. The town mysteriously gets attacked by lots and lots of birds, which inspired this Halloween costume.

Anna Wintour is the editor of Vogue Magazine and a style icon. Her look is an easy one to capture in a costume, with her signature bob haircut and sunglasses, and sleek, tailored clothing.

Frida Kahlo (1907-1954) was a Mexican artist known for her artwork as well as her style. Frida Kahlo costumes were (and still are) very popular, and quite easy to put together by combining lots of colors, prints, and textures.

This paper doll costume was easy to create using tagboard and markers. Don’t forget to include the foldable flaps found on paper dolls on your costume.

This costume is inspired by one of Picasso’s iconic abstract faces, featured in many of his paintings. This costume required some creative face painting, a black wig, colorful printed clothing, and a picture frame.

To create a Russian Nesting Doll (Matryoshaka Doll) costume, I purchased colorful floral fabric for the head scarves, blue fabric for my dress (replicated in paint for the smaller dolls). On the blue fabric and cardboard, I pasted on colorful fabric flowers and used a black marker to add some more pattern detail. The smaller dolls are made out of cardboard, paint, and fabric, and secured together with a steel rod.

Inspired by one of my favorite movie characters, police officer Marge Gunderson (played by Francis McDormand), this was a simple costume to create. It included a fur-lined winter cap, a police jacket, winter gloves, winter boots, and a hot cup of coffee.

In hindsight, I wish I had included her pregnant belly in the costume! 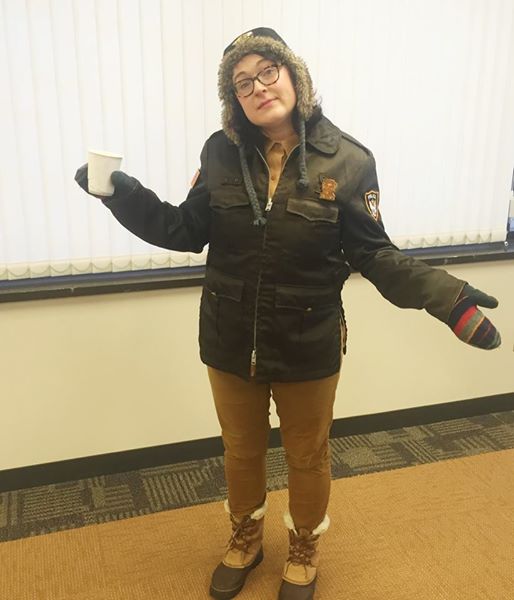 2017: The Lamp From A Christmas Story

The iconic leg lamp from A Christmas Story was the inspiration for this Halloween Costume. The lampshade was homemade, complete with fringe on the bottom and a light inside. I wore fishnet stockings and black heels.

This Lucy costume was inspired by the iconic Vitametavegamin scene from the I Love Lucy show (1952).

Bonus points if you can memorize Lucy’s famous Vitametavegamin monologue from the show!

2019: Jack and Wendy Torrance from The Shining

This is a fun Halloween costume idea for two people. This is from one of the final scenes of The Shining (1980), where husband Jack Torrance comes after his wife Wendy Torrance in The Overlook hotel. He uses an axe to chop through the door, sticking his head through where he famously proclaims, “Here’s Johnny!”

This was a very easy costume to create, inspired by the scene in Pulp Fiction (1994) where Mia Wallace (Uma Thurman) and Vincent Vega (John Travolta) compete in the Jackrabbit Slim’s Twist Contest.

2021: Violet Beauregarde from Charlie And The Chocolate Factory (2005)

Celebrate Halloween by making your own homemade candy at home.

And finally, be sure to follow Cheap Recipe Blog on Facebook and Pinterest. Let’s stay in touch and bond over our mutual love of cheap and delicious recipes!

4 comments on “Costume Inspiration For Halloween”